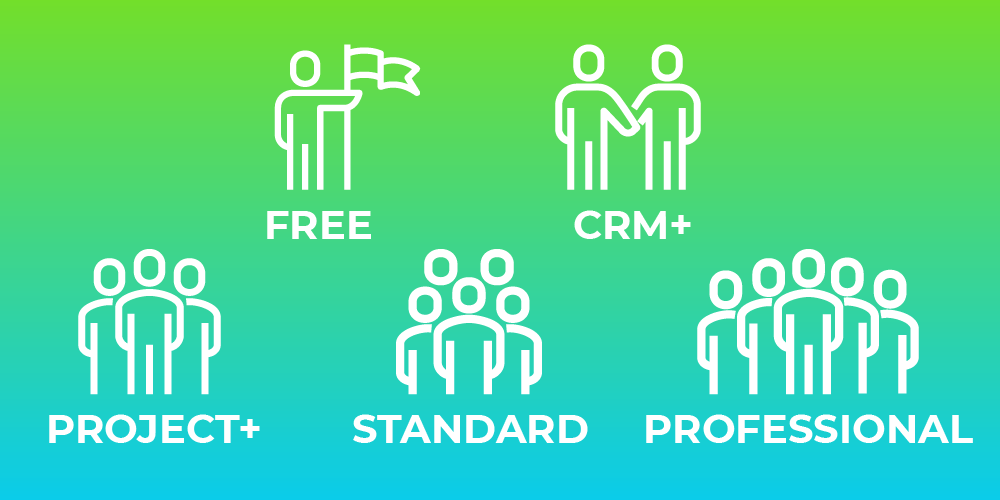 If you’ve been using Bitrix24 for a while, you’ve noticed that we’ve significantly revamped our pricing chart. The prices themselves haven’t changed, but we’ve added a new plan (Project+) and introduced two important changes to our free plans.

First, let’s talk about our new Project+ plan. A significant number of Bitrix24 users are professional project managers, who wanted to have a full featured project management solution with all bells and whistles for less than $99/mo. Done.

Second, the important changes in our free plan. One of the most common complaints from the free plan users was that while the wealth of features was appreciated, it felt like an overkill. Many folks wanted to know how to disable features that they weren’t using in order to make their experience more enjoyable. So, we’ve analyzed data from over 5 million free Bitrix24 accounts, identifying features available in the free plan that weren’t used by 98% clients and removed those from the free plan. It turned out that those features were ‘too professional’ for an average Joe and there was no actual need for them in smaller organizations. We are talking about features like ability to delegate a task to another employee or to set granular access rights inside a workgroup. We hope you appreciate the new simplified Bitrix24.

Another important issue for our free users is that while 99% of the time their accounts were operating at the speed of light there would be occasional instances when things would visibly slow down. This is where we have to get technical. As you know, when we launched Bitrix24, we wanted to have as few limits as possible. This is why our CRM comes with unlimited records and there aren’t any limits on the number of tasks, projects or workgroups that can be created inside free Bitrix24 accounts.

So, when presented with this technical issue one obvious solution would be limit the number CRM records, tasks and projects on the free plan. But we’ve decided against it. Because storing the data, even hundreds of thousands of tasks, doesn’t create much load nor costs us much money. What does create excessive load and degrades performance for other free account users is when someone is trying to search through multiple records.

We came up with a solution that we think is the best for everyone. All things that were unlimited in Bitrix24 stayed unlimited. But we did implement limits on operations for resource intensive operations. So next time someone is trying to search through too many ‘entities’ (that’s a technical term for searchable units, such as leads, deals, contacts or tasks), they’ll see a warning that will notify them that they’ll need to either delete old entities that are no longer needed to be searched through or upgrade to a plan that meets their desired search limit.

All free and paid users should see a significant improvement in performance, because rather than dealing with the problem of occasional overloads and slowdowns, the system will now prevent them by stopping the query before it’s executed.

Again, according to our calculations, fewer than 2% of accounts will run into these limits and even those who do will be able to remain on the free plan by regularly removing old entities that our system shouldn’t be searching through anyway.

We hope you enjoy the new simpler and faster Bitrix24.

Free. Unlimited. Online.
Bitrix24 is a place where everyone can communicate, collaborate on tasks and projects, manage clients and do much more.
Register free
You may also like
CRM
Change the Responsible Person in the CRM
Marketing
GDPR is Forcing Email Marketers to Evolve
Bitrix24 tips and updates
Bitrix24 Is Not Affected By Log4j Vulnerability
Websites
Google Maps block and free Graphics Editor in Bitrix24.Sites
Bitrix
Support
Resources
On-premise
Compare to
Apps
Partners
© 2023 Bitrix24
Privacy Overview