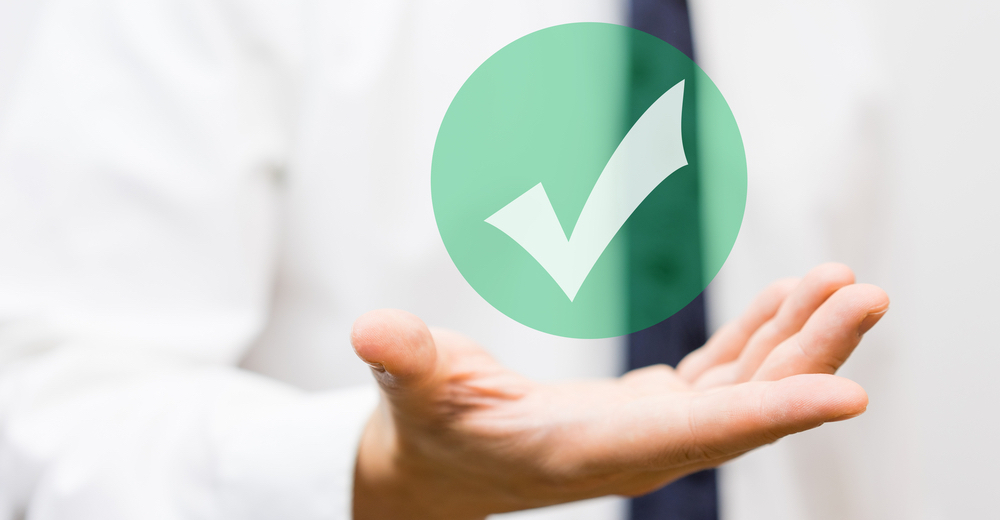 Bitrix24 Team
February 6, 2015
Last updated: February 24, 2022
This post is going to break down the business process that is developed in this video:

This post contains all of the pertinent screenshots of the business process template.

First, there are a few notes that should be made: 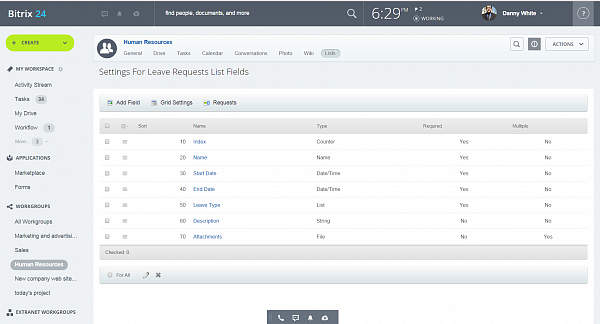 As mentioned in the video, it’s a good idea to create the standard business process templates that Bitrix24 offers, as some of them are useful or can be modified slightly to suit basic functions, even though they were made for the document libraries

Here is the wide-angle view of the flow chart that represents the business process: 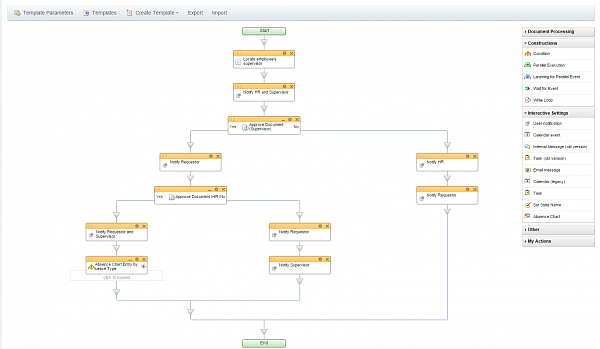 The first block in the template is simply a “Select User” block, which identifies the supervisor of the user (called Created By in the Document Fields in the builder) who entered the leave request in the list.
Throughout the bp template, any user who performs an action (such as giving an approval) can later be identified using the “Additional Results” section in the builder. It is not always possible to get the User’s name shown in the Image 3. Locate Supervisor: 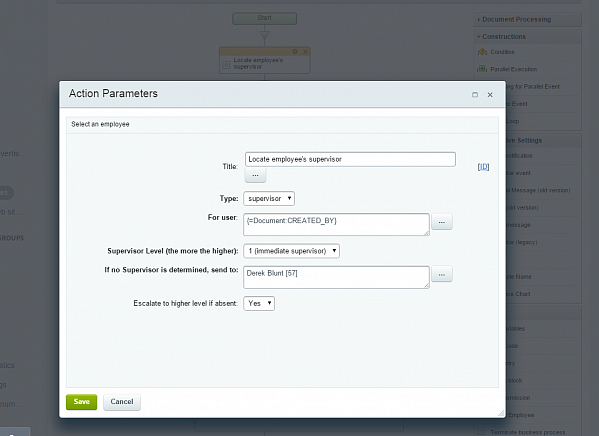 The notification to the supervisor and the HR department are shown in the next picture. Note that I have simply added the HR person(s) by name. 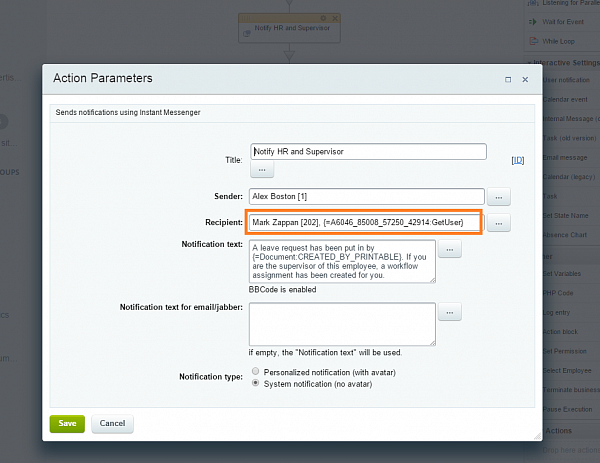 The settings for the supervisor’s approval looks like this: 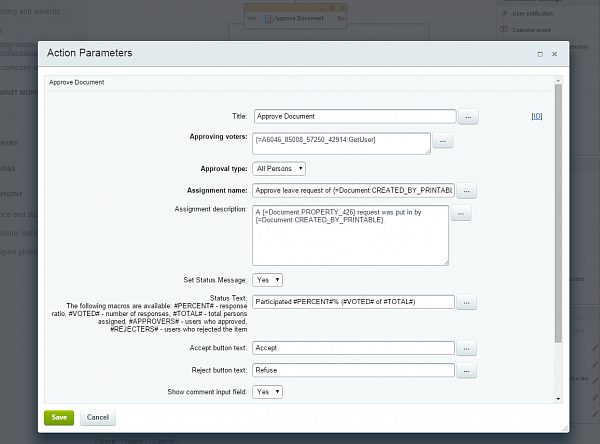 The HR Approval has the “any” person approval option. If there were multiple people in the HR department listed among the approvers, any one of them could complete the approval. 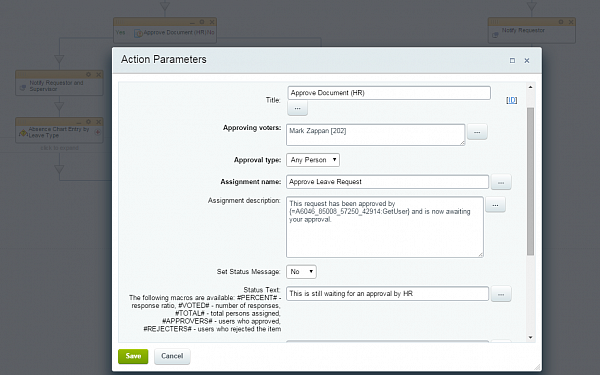 The last block of note is the Absence Chart. But there was a slight problem with the assignment of the Absence Type, since that field in the settings does not support the builder, so a rather wide condition branch that works off the list’s “Leave Type” (which corresponds to the Absence Chart’s type) was inserted. The darkened part of the Image below shows that I have created a branch for each absence type. 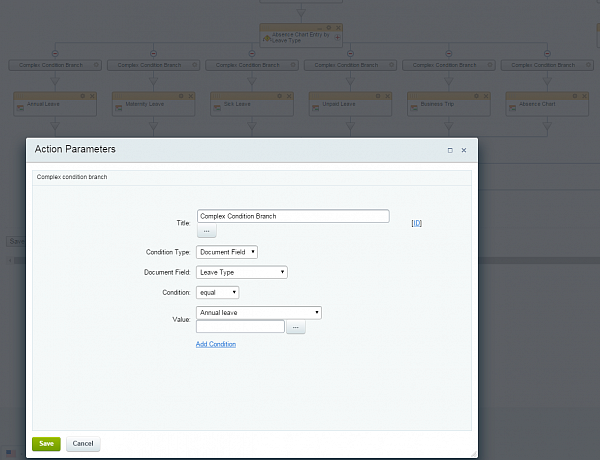 The settings in the condition branch cause it to look at the value in the “Leave Type” entered by the requestor, if it matches up with the Value (Annual Leave in this branch), it follows this branch.

The subsequent Absence Chart Box is then set for the corresponding Absence type. 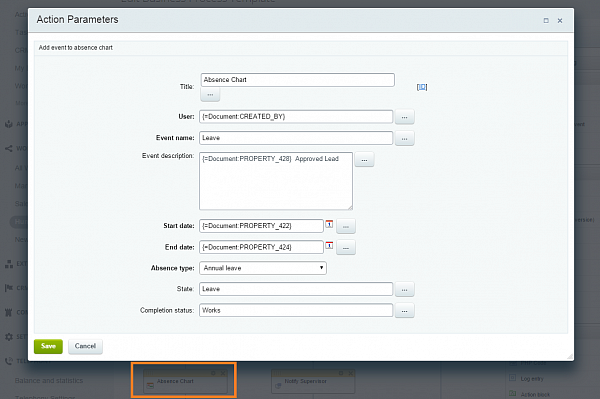 So by creating lists and business process templates to apply to them, you can add significant functionality to your Bitrix24 intranet.

Free. Unlimited. Online.
Bitrix24 is a place where everyone can communicate, collaborate on tasks and projects, manage clients and do much more.
Register free
You may also like
Bitrix24 tips and updates
10 Bitrix24 Hacks You May Not Be Aware Of
Bitrix24 tips and updates
Lookalike audiences in CRM Marketing
Communications
How To Create Activity Stream Post From Email
New Bitrix24 Introduction Webinar
Bitrix
Support
Resources
On-premise
Compare to
Apps
Partners
© 2023 Bitrix24
Privacy Overview