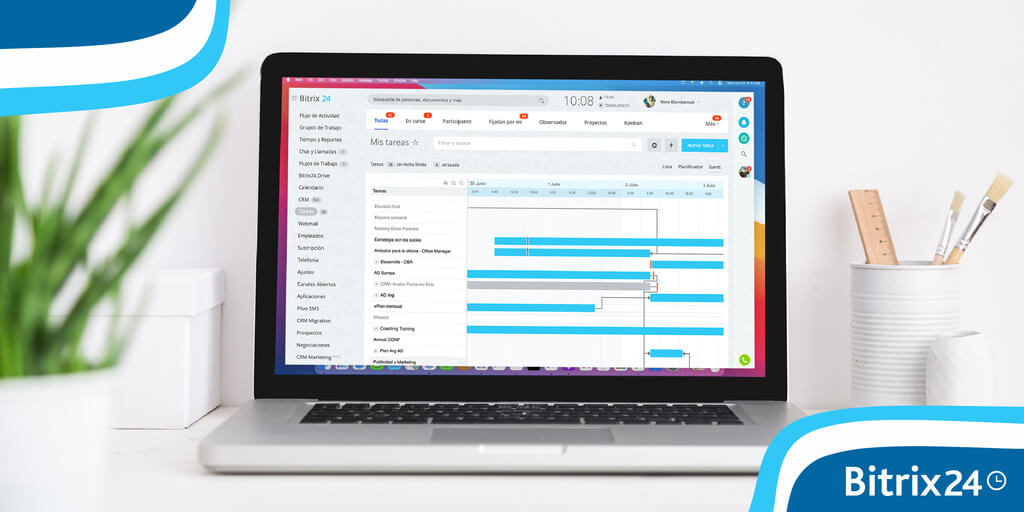 Bitrix24 Team
October 28, 2021
Last updated: October 28, 2021
Gantt charts enable project managers to track project schedules and analyze the dependencies between tasks. However, this tool that looks like a type of bar graph is far from being perfect. It might be too costly — but at the same time excessively complicated and not too efficient.

This is probably the most famous of all the Gantt chart alternatives. It's a complex and versatile solution that should come in handy for businesses of any scale and industry. It favorably differentiates itself from conventional Gantt charts in the following aspects.

Bitrix24 features many more tools than Gantt charts. It has a full-fledged CRM where you can store detailed information about each of your customers. It can generate insightful reports that should help you to plan your further activities. Check its official website to get to know about more functions.

This tool is focused on the chronological sequence of events. It lacks complicated details that are typical of Gantt charts. You can resort to it during your meetings with stakeholders because it's not overloaded with intricate dependencies. Also, it won't take you much time and effort to add information to a timeline — the process is highly intuitive.

This solution has the same benefits as the previous alternative to Gantt charts. All the information is represented very comprehensively. Many programs and apps that offer such dashboards enable you to use ready-made templates or customize them. In a couple of clicks, you can generate status, progress and resource utilization reports. You can save this information in your archives and use it to analyze your quarterly or yearly performance.

These Gantt chart alternatives are also known as PERT charts, which stands for Program Evaluation and Review Technique. They resemble flow diagrams that show the series of activities that make up a project.

Such diagrams are good for determining the duration of each project. Each project task is shown in a separate box. Lines join up the boxes in the order that they need to happen. You can conveniently track dependencies and optimize the allocation of resources.

This solution works best for simple projects where tasks don't overlap too much. If you deal with many parallel strands of activity, it might be tricky to display them all on one page. To change just one task, you might need to move dozens of lines on the diagram.

These Gantt chart alternatives are optimal for teams with a flexible workflow. Most businesses today work with digital boards — but some might stick to their physical analogs because of greater psychological comfort.

Kanban boards enable managers to track the progress of tasks from start to finish. Multiple columns stand in for the different phases of your production cycle. To show how the project moves on, you just need to move cards. It's a very simple process and it will facilitate communication within your team.

Some managers rely on Gantt charts to build out projects. Then, they would carry over all that data to the board. This should allow them to monitor progress without micromanaging. When they notice a potential block down the pipeline, they can promptly reallocate resources to keep the project going on.

Scrum boards also organize projects chronologically by sprints. Just as their kanban counterparts, they are flexible and easy to customize. They are segmented into horizontal or vertical lanes that clearly reveal the status of each task.

This solution uses swim lanes to delineate duties across different teams. This is what you can do with flowcharts.

This is one of the best Gantt chart alternatives for large projects with multiple teams.

This is probably the simplest of all Gantt chart alternatives. You might want to use such a list by itself or attach it to a project network diagram. The latter option will enable you to pair a high-view perspective with specific action items.

To compile checklists, you might use the simplest software, such as Notepad, Microsoft Word, Excel and so on. When working in Excel, you might want to stick to the following algorithm.

If you wish, you can also use color codes to show whether each task will be completed on time (green) or there might be a delay (red).

The biggest merit of checklists consists in the fact that everyone understands them: from shareholders to specialists who have joined your team just recently. You won't need to spend too much time and effort on explanations.

The original Gantt charts resemble Excel spreadsheets that have a timeline. It's good because you can check all your tasks in one place. However, you risk leaving too much data behind that graph.

Thanks to the sheet view, you can get the best of both Gantt charts and Excel. These are just a few examples of what you can do in this type of software.

Depending on which software you choose, you might be able to switch from the sheet view to conventional Gantt charts. You might want to display only some part of the information as charts.

Hopefully, this article came in handy and now you better understand the specifics of Gantt chart alternatives. Apart from the solutions that were mentioned above, you might consider using the so-called simple Gantt charts — simplified versions of the original tool that are much easier to understand and discuss. No matter which alternative you choose, it should help you to optimize your workflow and increase your team's performance.