What is agile methodology

Software development project management has various methodologies which are implemented for changing the workflow into a more efficient way. Agile methodology is just one of them yet an extremely popular one. It became so common among project managers because the approach both focuses on result and people but also embraces change. This means agile projects are both convenient for customers and developers. Clients can be sure their demands will be fulfilled, while the workers know there will be no need in recreating all the work in a situation when a mistake is done. We suggest to dig into the details of agile methodology process and see how it can be beneficial for your project.

Back before agile methodology existed, Waterfall methods were used most commonly in software development. That meant before a project even started multiple specifications should have been made. Developers followed a document with business requirements, but creating the document took a long time as every detail from functional specifications to a strict plan was captured there. As a result, even before the project was handed down to developers a lot of time was wasted.

Next, when developers finally started to follow a plan they might have come across difficulties or needs to implement changes. As the documents were quite lengthy, it was easier to make mistakes and accidentally skip some requirements because they were lost in the burden of extra specifications. That meant the whole project was supposed to begin with the basics again. Altogether creation of a certain software could lead to 1 or 2 years of work.

In the mid-nineties a demand for a new methodology arose. Agile methodology wasn’t born immediately back then, but people started implementing changes into their regular workflow, mixing various approaches and generally searching for a more efficient way to manage software development projects.

It was discovered that approaches which enhance communication of clients and a team of workers provide the most successful results. Other features to look for in an approach approach included self-organizing teams, regular deliveries of working products as well as transparency among the workers who are involved into the project. These approaches were later on specified in terms of various frameworks such as Scrum, Extreme Programming and many others.

Still these approaches needed specification and precision. But it was only in February 2001 that a group of software developers gathered together and came up with the Manifesto for Agile Software Development. This document contained 12 of the main principles common to all agile projects regardless of the chosen way to implement the methodology.

Nowadays, as agile methodology became so widespread, organizations which help to adopt Agile ideas were created. Later in 2001 Agile Alliance was formed as a first organization which curates and works on improving the principles of agile software development. It has been working on this goal since then.

What is agile methodology

Agile methodologies can be briefly described as a concept of project management which includes creation of a plan for a shorter period of time called sprint, analysing its results and implementing change in the upcoming sprint if needed. 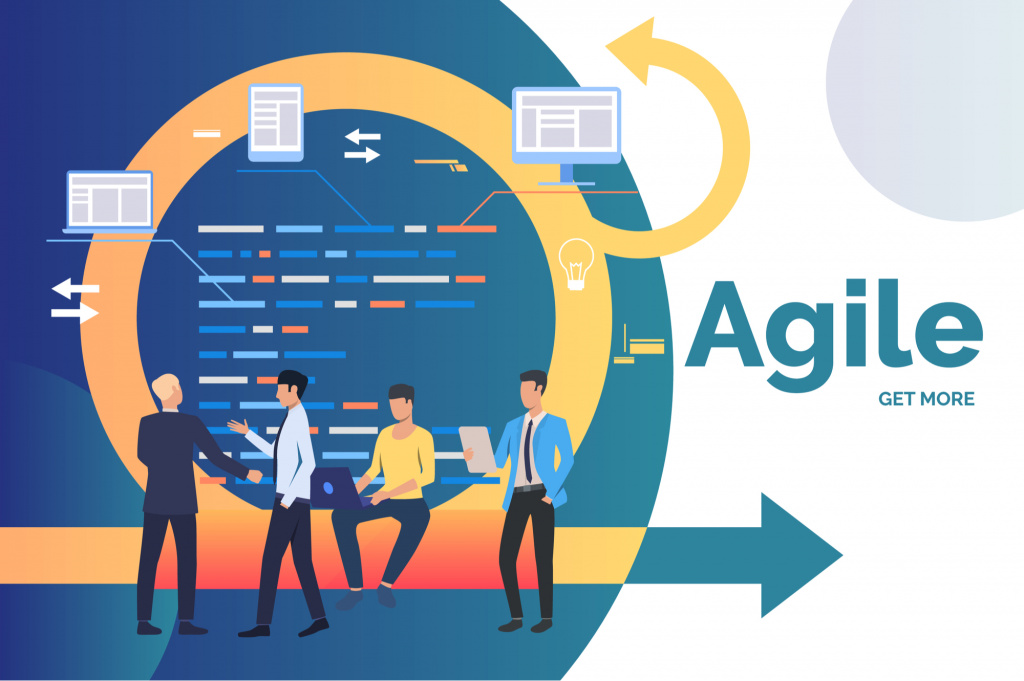 There are four key pillars which agile methodology is based off. Those mean:

The Manifesto for Agile Software Development consists of 12 main principles as well. Those include:

Agile software methodologies suggest a great system which allows to provide results regularly. But there are certain environments where it perfectly suits the needs of workers:

In those cases agile development methodologies will allow to take each necessity into consideration and eventually deliver a working product which corresponds with the demands of a customer.

But there are other benefits agile methodology can bring to any software development environment and project management in general:

Even though agile methodology might seem just perfect, there are also several important drawbacks which should be taken into consideration while choosing a methodology for your project.

The base of agile methodology is denying overwhelming amounts of documentation which distract from the main aim of a project. But that can be a disadvantage as well. In constantly changing environments where new team members might join the group anytime it will be harder to clarify the situation to newcomers. Lack of documents also makes it harder to create final reports, especially since the requirements are constantly changing.

Agile projects can start with little to no specifications from the side of a customer and adjust to the demands as the work goes. And even though that doesn’t form any limitations to developers, it may also result in misunderstandings which lead to creating a product a customer won’t be satisfied with. And with no definite result some customers might be tempted to iterate the product more and more, applying additional features which were not specified initially. This also leads to costs rising.

Daily meetings as a distraction

Even though it is thought that daily meetings are supposed to enhance collaboration and clarify the issues timely, they also require time and involvement both from the side of a customer and a team of developers. Everyone should find time in their schedule which can be devoted to preparing for a meeting. Users and testers should also be available daily to systematically approve the existing result so that the developers could move further. This means even such important things as meetings might require too much energy and commitment which eventually might become an issue influencing developers’ work.

As we already said before, agile principles are implemented through various systems. We suggest to discover several of them.

Scrum is an agile methodology based off sprints. Here working on a project starts with a customer creating a list of particular features they want to see in a product. Scrum team breaks the task into smaller pieces which can be completed within a sprint which is 1-2 weeks long. Each term has sprint backlog with requirements for the current sprint. When the sprint is over, a customer reviews a product, suggests iterations and a new sprint with a new backlog begins. 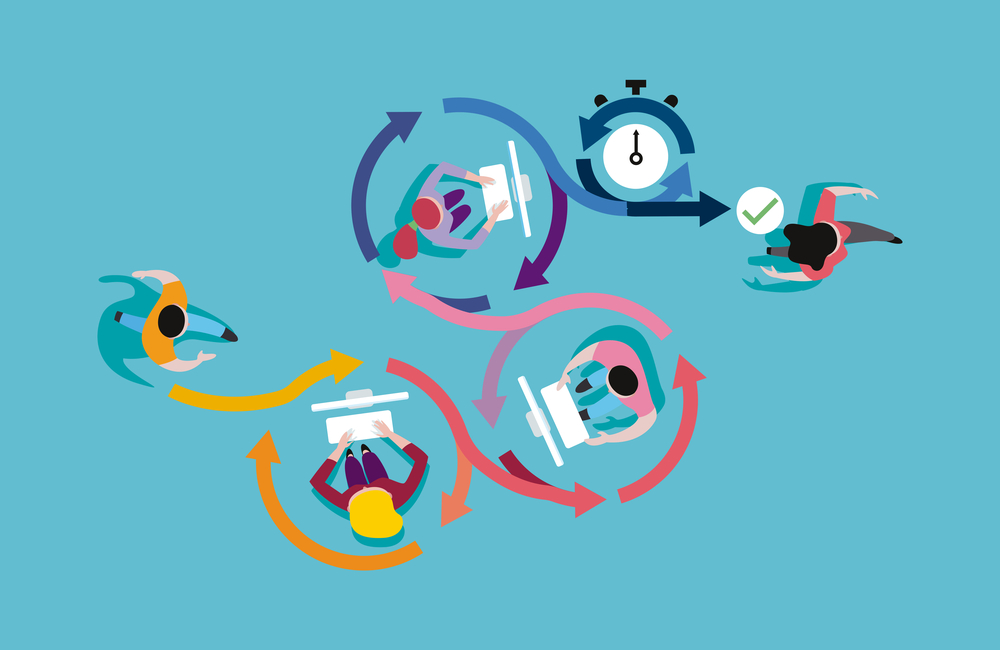 Scrum teams are usually of a smaller size and consist of 7-9 people. Each person in a Scrum team has their own role:

Extreme Programming is especially convenient for teams which face constant changes from the side of a customer. It focuses on delivering a working product which corresponds with current customers’ demands as fast as possible. These products include improvements and changes of a previous version but also have space for new iterations.

Iterations are implemented regularly within 14 days. Each cycle consists of 6 main stages:

Crystal methodology is a set of ways used to implement agile. Those include Crystal Clear, Crystal Yellow, Crystal Orange and many other approaches hidden under Crystal umbrella term. Depending on which one you choose, it might be more suitable for bigger or smaller teams, longer or shorter planned project lifecycle.

Like other agile methodologies, Crystal approach means less documentation with the aim to value results and individuals more. There is a set of prescribed roles in Crystal which mainly include a Project Sponsor, Designers and Programmers, Unit Testers and Users, but the number of roles might be extended.

As any agile approach, Crystal uses three of the main principles as a base:

We tried to break down the main ideas of what agile methodology is and present every detail which might be important while considering agile project management as a main approach of your project. It is extremely important to choose the right way of managing a team as it influences successful performance and regular results. With various agile techniques it is possible to find the right way of implementing agile methodology into your current situation while considering important features and individual characteristics of a work environment you have.

Free. Unlimited. Online.
Bitrix24 is a place where everyone can communicate, collaborate on tasks and projects, manage clients and do much more.
Register free
You may also like
Advantages and disadvantages of using a Scrum task board
Remote Project Management Done Expertly With Bitrix24
Pipedrive alternatives that are better than Pipedrive
How to Choose Free and Low-Cost CRM for Non-Profits
Bitrix
Support
Resources
On-premise
Apps
Partners
Copyright © 2021 Bitrix24