What you need to know about a Kanban board


Creating the environment for efficient work is an important issue for every project manager. The biggest problem is giving the team of developers enough space while having a general overview of the current situation. Various tools are created to allow the control and the insight into the project. They can help to denote the issues and optimize the work process in correspondence with the project needs and workers’ possibilities. Kanban style board is a great tool which helps to manage the team. If you are interested, we can help you discover this way of managing a project by discussing its advantages and disadvantages, as well as the basics of implementing.

What is a Kanban board

If you want to have visual workflow and efficient work progress Kanban boards are perfect for your goals. Physical and virtual tools can be used for this purpose.

The system originated over 70 years ago at Toyota production. The word “Kanban” itself means a “signboard”, and that what it originally was. Toyota workers were introduced to a system which included cards used to denote the stage of the production. Such cards allowed to understand what is still needed to be done before the next step is taken. The visualized work scheme was a success as it drew attention to the issues which need to be solved and eventually resulted in a faster and more efficient production.

But it took Kanban task board a while before it began to appear in agile management projects. It was only in 2007 that David Anderson formulated the method and re-invented it to suit modern project management processes. It is now widely used in IT, software development and human resource management, but this is actually a quite simplistic method which can be applied at any manufacturing system.

Visuality is what represents Kanban system best. It is often difficult to realize what is causing problems as well as the amounts of tasks which need completion before a visual representation of some form is given to workers. When a map of a workflow is created on a Kanban board, the insights of all the processes and issues become more visible, which allows to channel the efforts to solving a certain problem.

The main elements of Kanban board are cards which are aligned into vertical and horizontal lanes. That allows to adapt Kanban system to your current situation depending on specifics of the work and the way the team participates in a workflow. It is possible to use various card colors to indicate urgency or different types of work. Other items can be also drawn into the process, such as images denoting the people who are responsible for the tasks.

Visualizing the whole map of a project allows to make the work the most efficient because it is much easier for the workers to perceive and memorize the most important details. All of the cards are also collected on a board which means you don’t have to search for information and can address a single place every time you need additional information or just want to keep updated. It is also transparent to both customers and developers which allows to transfer the information if the most importance quickly.

Main elements of agile Kanban board 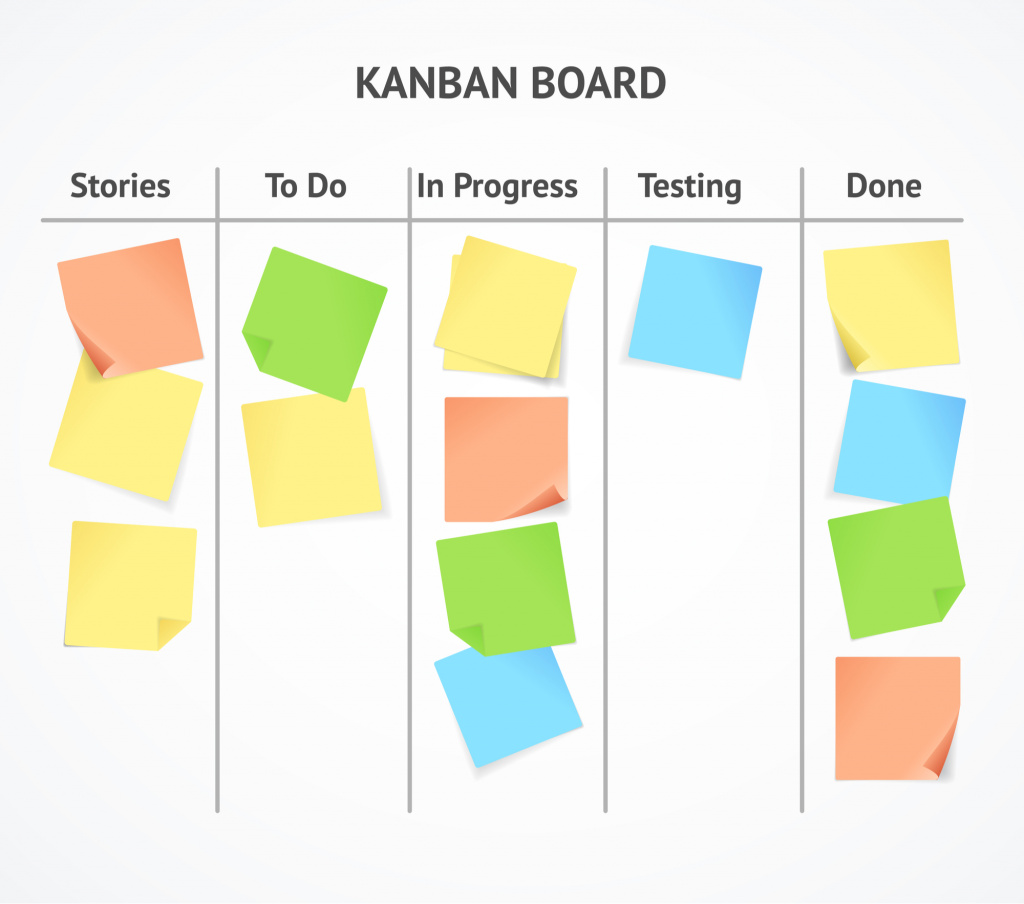 Now that you know what a Kanban board it, let’s discuss its main elements. The system created by David Anderson implies five main components of a Kanban board. They can be applied to both physical and virtual type of a board so the type you choose won’t matter as much. Those five elements are as follows:

How to use a Kanban board properly

Before you start creating your own Kanban board, you have to decide on a type of it you want to use. Both physical and virtual ones are popular, however some might be more suitable for your current project than the others.

A physical board is preferable in case all of the co-workers share the same location. So if your developer team works in the same office a physical board will be just perfect. This will allow each team member to interact with the board and make updates. Since the tactile aspect is included, it might be even more efficient as a habit of making update forms as well as the memorizing process goes faster. And you only need a few things to organize a physical Kanban board at your workplace, especially if people who work on a project you are managing don’t interact too much with other departments and teams.

Virtual Kanban boards offer a possibility to cover much more people who are integrated into the project. If your team has multiple members some of which work distantly you should consider a virtual board over a physical one. At the same time, online Kanban board tools offer other features such as counting cycle time and creating reports while in case of a physical board this will be manager’s responsibility.

If you want to keep all of your colleagues updated on each work stage and task, you can create email updates which are sent daily, or check out other features. Your remote developers won’t miss any task or update as well since virtual Kanban boards allow to track it only using a computer or a mobile device.

When you choose the optimal option for your current project, it is time to move on and get started with using a Kanban board:

Altogether Kanban boards give a perfect opportunity to break down complicated projects into simple, understandable tasks which don’t overwhelm the vendors. Companies using Kanban system succeed in product development because each team member has access to current updates and understands the whole project well enough to do the effort. Each of them also has a chance to complete a board and give updates. But what is also beneficial is that there is no need to hold daily meetings if you want to see the progress clearly, as every task completed and every issue arising are represented on cards.