Using Emojis At Work: Facts and Stats and Etiquettes 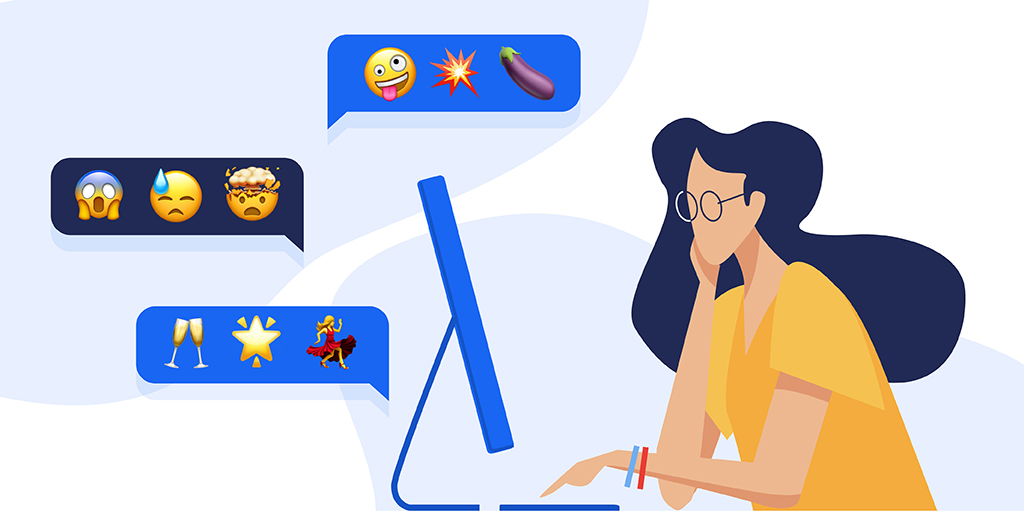 Irina Valyanova
October 8, 2020
Last updated: October 8, 2020
The issue of “emojis vs. professional ethics” has been floating around ever since emojis themselves became a thing. Even though multiple studies have been conducted (some dating as far back as the late 90s), researchers still can’t agree on whether emojis are great for communication or totally unprofessional.

Now that we all have been pushed to use chats and emails even more frequently than we did before the Lockdown, the “emoji” issue is ever-relevant. Let’s take a closer look at this issue and see if we can work out a universal solution.

Emojis: What We Should Know About Them


First of all, let’s get one thing straight - emojis ≠ emoticons.

Emoticons are essentially punctuation marks, letters, and numbers used to create pictorial icons that display a certain emotion or sentiment. The first documented use of emoticons occurred in 1982 when a guy named Scott E. Fahlman proposed to use the “:-)” character sequence to indicate an intended joke. He was smart enough to have invented the opposite symbol for “things that are not jokes”.

Emojis, on the other hand, are a more recent invention. According to the commonly accepted version, they were first created by a Japanese interface designer Shigetaka Kurita in 1999. 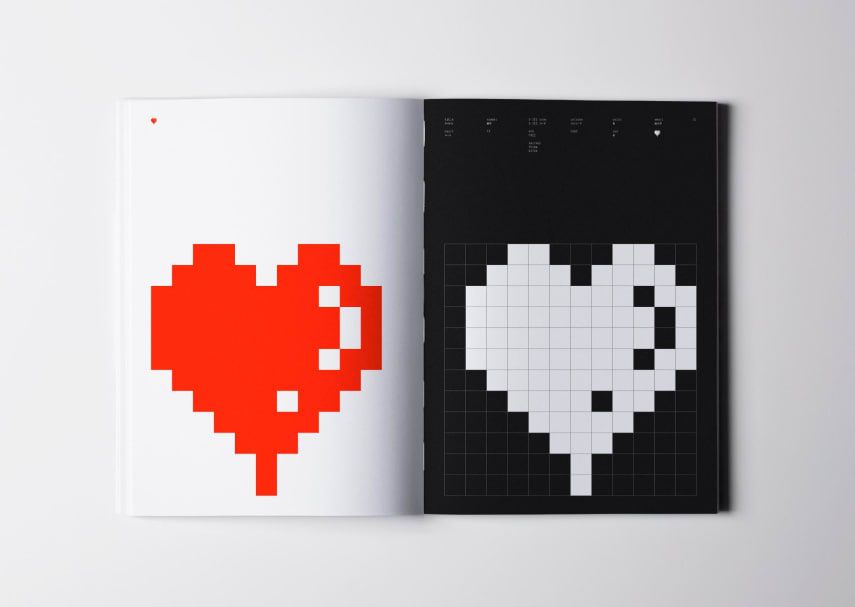 However, they did not become popular outside of Japan until the release of the first iPhone in 2007 when Apple hid an emoji keyboard in an attempt to attract Japanese customers. North American users were quick to discover the keyboard and from there it spread onto the rest of the world now becoming an integral part of any messenger or chat app.

Unlike emoticons, emojis are actual mini-pictures rather than typographic approximations. The idea of emojis is rooted in the Japanese language itself, or a part of it called “kanji”. Kanji are Japanese characters that are largely based on Chinese ideograms. One such ideogram often represents an object, concept, or idea.

This approach of expressing something more than just an emotion in one symbol/pictogram paved the way for emojis. In fact, the word emoji itself comes from Japanese e (絵, "picture") + moji (文字, "character"); the resemblance to the English words emotion and emoticon is purely coincidental.

Why Do People Use Emojis?


One way or another, emojis have become a cultural phenomenon reshaping the way we express ideas and emotions across languages, friends, and generations. Part of what makes emojis so popular and accepted in different cultures is the fact that they are instantly and universally understandable pictures rather than words and letters of a foreign alphabet.

Emoji users believe that emojis make conversations more fun and people who are engaged in these conversations - more approachable and likable, according to the data from a 2019 survey on emojis done by Adobe.

In fact, most people who use emojis agree on the fact that these little symbols help them to lighten the mood of conversations and show their support/empathy. 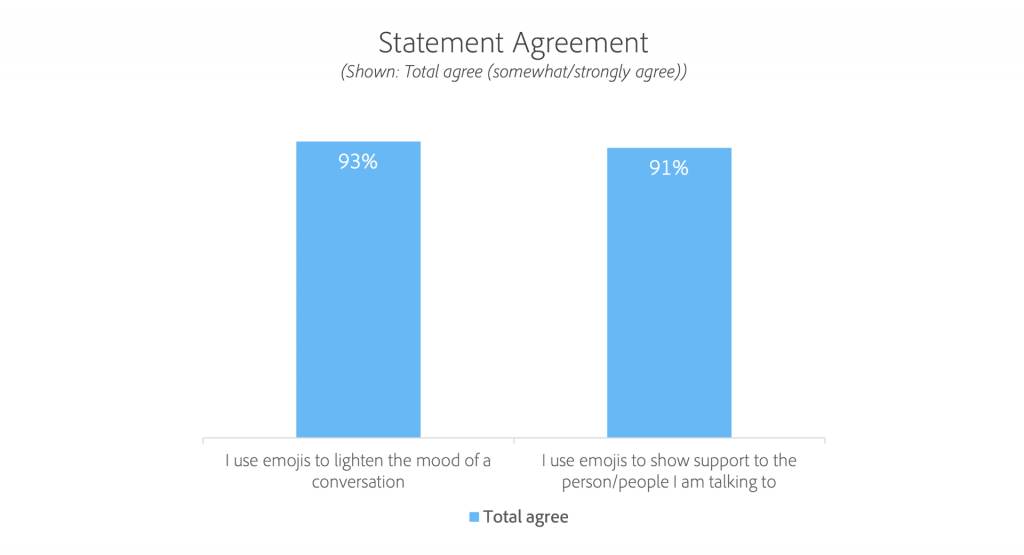 It goes even further: as much as 83% of Gen Z’ers (a demographic cohort, people who were born after 2000) say that they are more comfortable expressing emotions through emojis rather than phone conversations or video calls.

And, finally, get this: half of the Internet users (52%) say that they are likely to use emojis as a way of communicating a major milestone or life decision. That’s how big a part of our culture emojis have become.

Nevertheless, despite all of the positive factors mentioned above, the increased use of emojis and expansion of their catalog (currently listing 3,304 unique emojis in the Unicode Standard, as of March 2020) has led to multiple controversies and arguments over the use of certain emojis (like this

Here in this article, we will mostly concentrate on the issue of using emojis in the workplace. Before we go into the rights and wrongs of that, let’s take a look at the stats (mostly refer to the US population) that will shed some light on how people are using emojis now and what they feel about them.

Emojis in the Workplace: Stats and Facts


The question you might be asking yourself now is “how many people actually use emojis at work on a regular basis?”, and the answer is right down below. 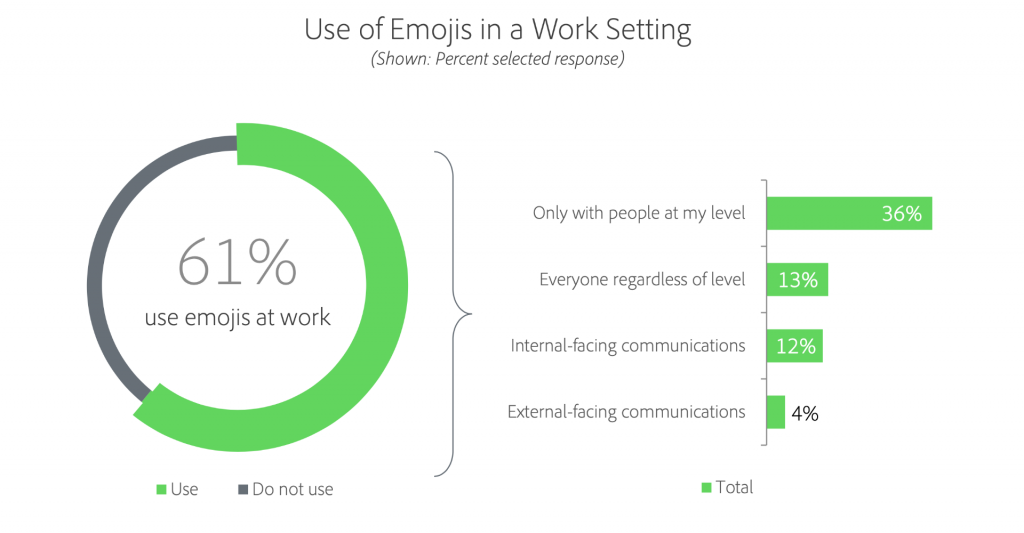 Pay close attention to the breakdown chart on the right, which mentions two interesting things, which we will refer to a bit later:
Even though sixty-one percent is, in fact, a majority, 72% of American workers reported some initial hesitation around using emojis. Once they get a taste of them, the hesitation seems to go away.

The overall result of 61% may seem surprisingly low after all we have learned about emojis in the previous segment of the article. However, this next piece of data gives us a bit more information on why that might be.

It turns out that people use emojis mostly when chatting with their friends and partners, which is logical given the nature of such conversations and the level of informality that emojis suggest.

That being said, nearly 3 in 5 emoji users have received the wrong emoji, and a third have regretted sending one, which may indicate the fact that emojis (much like words) are subject to careful choice based on the context.

Finally, we have data from an OfficeTeam survey, according to which 39% of senior managers believe it’s unprofessional to use emojis in the workplace. This may indicate a slight generational gap since most senior managers belong to such demographic cohorts as Gen X (people born roughly between 1965 and 1980) or Millennials (those who were born between 1980 and 2000).

Creating a Guide to Using Emojis at Work


Now that we have plenty of statistics to process and get our thought process going, let’s try to sum them up and create a set of recommendations that any business can use when approaching the “emojis vs. professional ethics” issue.

0.   Do not use emojis when communicating with people you don’t know very well

Otherwise known as “common sense” and “social rules”, this is something most people should acquire and master by the time they’re in their mid-20s. Definitely, not something that should be taught by an employer, we put this tip aside as we believe your employees know it already.

1. Emojis are generally acceptable in a company’s internal communications

With a few asterisks and exceptions, of course.

Exception one. Along with some common sense mentioned above, your employees should employ (no pun intended) a tactic called “mirroring.” Mirroring in communications means that you should observe the style and delivery of the person you’re writing/talking to and respond in a similar fashion.
E.g., if your teammates don’t mind using emojis in their messages to you, then they most likely won’t mind you doing the same. That is, if you’re both at the same level of the hierarchy. If not - see exception two.

Exception two. Using emojis in the messages and emails to your supervisor, manager, director, or CEO is a no-no by default since it suggests the level of familiarity that you probably do not have with these people.

Using emojis when communicating with your subordinates is purely at your own discretion. Several studies are suggesting that using emojis in such situations may make you appear less competent. If you’re not afraid of that, then go ahead but don’t say we didn’t warn you.

2. Using emojis for external communications should be prohibited by default unless agreed upon otherwise

According to SurveyMonkey data, 45% of employees (!) think companies shouldn’t use emojis in marketing or customer communications, and that’s quite understandable.
Whenever communicating with a client, prospect, or a contractor, your employees represent your company and/or brand. There’s no way of knowing whether the use of emojis will be appreciated or will trigger a strong negative response.
That’s why you should play it safe and eliminate emojis from your external communications completely unless it’s a part of your marketing campaign visuals or some radical experiment you’re conducting at your own risk.

In case of an event that features multiple people from different divisions of your company (even if it’s strictly non-public), there should be rules regulating the use of emojis. Typically, these rules (Emoji Policy) are reflected in your Code of Conduct that every employee should read and follow - more on that below.

4.Emojis that some people find suggestive or inappropriate should not be used at all (especially for international teams)

You would be surprised but some seemingly innocent emojis can be (and are) open to interpretation to the point where their use has to be restricted.

For example, this eggplant (aubergine if you’re British)

emoji is commonly used to represent a penis while this peach

emoji is used as a euphemistic icon for buttocks to the point where only 7% of English-language tweets with the peach emoji refer to the actual fruit, according to a 2016 Emojipedia study. Way to go, people, way to go.

Also, good luck trying to convince your friends and colleagues that this emoji below actually means “good friends” (which it does) and not what you thought first. 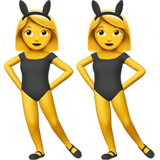 This “open for interpretation” issue may become even more serious when you’re managing an international team where people come from different cultural backgrounds and there’s no way of knowing what emoji might hurt their feelings.

The best way to go about emojis in your company is by allowing your employees to use them with certain restrictions that should be specified in your Emoji Policy. Every employee should know that emojis (much like words) have to be chosen carefully and are subject to controversy and potential PR losses when used inappropriately, especially in public.

Use common sense, play it safe, and remember - emojis are great but only when they are used at the right place and at the right time.
Free. Unlimited. Online.
Bitrix24 is a place where everyone can communicate, collaborate on tasks and projects, manage clients and do much more.
Register free
You may also like
Applications
Bitrix24 Integration with Miro
Bitrix24 tips and updates
New Bitrix24 Webmail Is Out (And It’s Amazing)
CRM
CRM basics: Converting Leads and Business Processes
Human resources
Social HR Explained - Document Collaboration
Bitrix
Support
Resources
On-premise
Apps
Partners
Copyright © 2022 Bitrix24
Privacy Overview