Advantages and disadvantages of using a Scrum task board 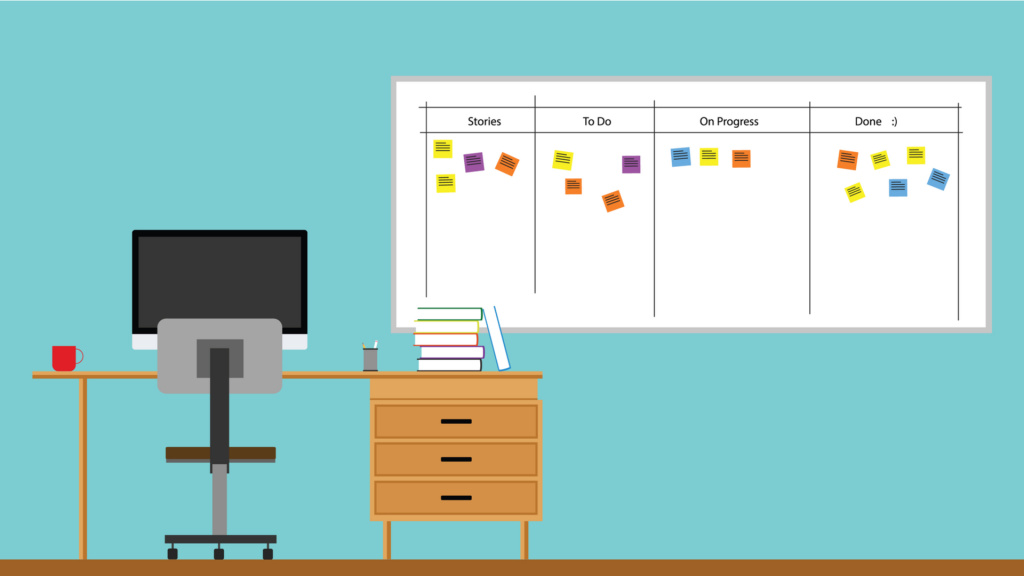 In case you are already familiar with Scrum methodology, you might as well know about Scrum boards. This is what allows the Scrum team keep up with the process and have an overview of a backlog created for the current sprint. Daily stand-up meetings might also help to improve a Scrum board as they allow to update the information represented on it. A simple system of columns which correspond with the tasks in progress, those completed as those which are waiting for the developers to take them is used while creating a Scrum board. This is what makes the iterative form of the management possible. A Scrum board, as well as other different task tracking tools, can both be physical and virtual.

What is a Scrum board

A Scrum board allows to get a visual representation of the whole project which is now performed by a certain developer team. It helps to make the process transparent for each of its members as well as allows the team to manage their schedule correctly in correspondence with top priority tasks.

A basic Scrum task board has four columns:

This is generally applicable for the most projects, but in case managers want more insight into the work, they can add extra columns. Those include tasks which still need verification, as well as the most important tasks which have to be done as soon as possible. But altogether a Scrum board is variable depending on current needs.

Each story represents customer’s desires and requirements for the final product. The To do list includes every step that has to be done to complete the current sprint. Those are little tasks which commit to the final product creation. At the same time, breaking down one big task into several smaller tasks makes it easier for the developers to cope with them as well as understand what is actually required.

Members get certain tasks before each and every sprint starts. Now a specific person is responsible for completing a task. At the beginning task cards can be found in a To do section, but as developers start to work on them, the notes are moved across the whole chart, until they are completed and appear in a Done section.

When the sprint is over the results are analyzed. The perfect situation is when all of the tasks are completed. Work efficiency and time spent on certain tasks is also analyzed by Masters which allows to optimize the process and deliver working products faster.

Advantages of using a Scrum task board

To help you decide whether you should use a Scrum board or not, you should also learn more about its pros and cons. Let’s start with its best sides:

Disadvantages of using Scrum task board

As well as pros there are always cons. These are the things which might make Scrum board system less appealing:

How to use a Scrum board properly

Even though virtual and physical Scrum boards share the same concept, the way you implement them into your daily work might differ. Let’s start with a physical type.

First you have to create a board. You have to draw a grid yourself. We briefly described the main components of a Scrum board earlier, so use it as an idea while designing your board. But keep in mind all of the important things that you need to keep track of so that you could add a column or two in the general process. Give enough space to each user story you want to complete over a sprint and fill them up.

The next step is to break each user story down into simple tasks. Feel free to use sticky notes at this step as tasks will move across the board while they are completed or in the process. Choose a member of your team for each task and write his or her name on the task sticker. Don’t overwhelm team members with multiple tasks at the same time - start with one of them and, as its gets completed, developers can choose another task to work on.

Workers now are responsible for certain tasks completed within set deadlines. They are also responsible for giving feedback which both is represented in daily meetups and moving the tasks over the board to the Done section. As the task is completed, a developer can choose another task from the To do section.

An online Scrum board is not much different from a real one, except for many processes are automated. You already have a template with basic columns which you can edit. When you are done with writing stories and tasks, you can start assigning your team members to certain responsibilities.

Online Scrum software suggests an easier way of assigning a team member to a task. You just type their email in the special section and they get a notification. Then they can enter your preferred Scrum system and study the task in more detail.

The rest of the process is pretty similar to the physical board. When the task is completed or is ready to move to another stage, the person who works on it pulls it into the corresponding column. At the end of a sprint all information is already counted and suggested to the manager.

As you could already see, Scrum boards are great for visualizing processes and stages of project completion. They are extremely simple to install and as simple to use once you get the basics of working with it. Test it in your own working environment to see how productive you and your colleagues get.

Scrum is a project management methodology that involves a team of 10 or fewer people working on tasks in short iterations called “sprints.”

What is Agile Scrum?

Agile is a philosophy, a general idea, a set of core values and principles describing an iterative approach to project management. Scrum is a specific Agile methodology, a practical method that is used to facilitate a project.

What is Scrum methodology?

The Scrum methodology suggests an iterative approach to completing a project. In Scrum, the team organizes itself and breaks up one overarching objective into one to two-week time frames called sprints.

What is Scrum project management?

Scrum project management methodology is a framework that involves a team of 10 or fewer people working on tasks in short iterations called “sprints.” It is frequently used in software development.

What is a Scrum board?

A Scrum board (also known as Kanban board) is a board designed for the visual representation of the project progress. It usually features several columns (To do, In progress, Pending approval, Done, etc.) with tasks being moved from one column to another as the project goes on.

What is daily Scrum?

A daily Scrum meeting is one of the key elements of the Scrum framework. Typically held in the morning, this quick meeting (usually 15 minutes or less) has every team member share speaking about what has been done, what will be done, and if there are any issues.

Free. Unlimited. Online.
Bitrix24 is a place where everyone can communicate, collaborate on tasks and projects, manage clients and do much more.
Register free
You may also like
Sales Prospects: What is It & Why It's Important
7 Secrets for Using AI to Improve Customer Experience
TOP 15 Enterprise CRM Software in 2021
Timeboxing and Business Software: Complete Guide to Effective Project Management
Bitrix
Support
Resources
On-premise
Compare to
Apps
Partners
© 2023 Bitrix24
Privacy Overview