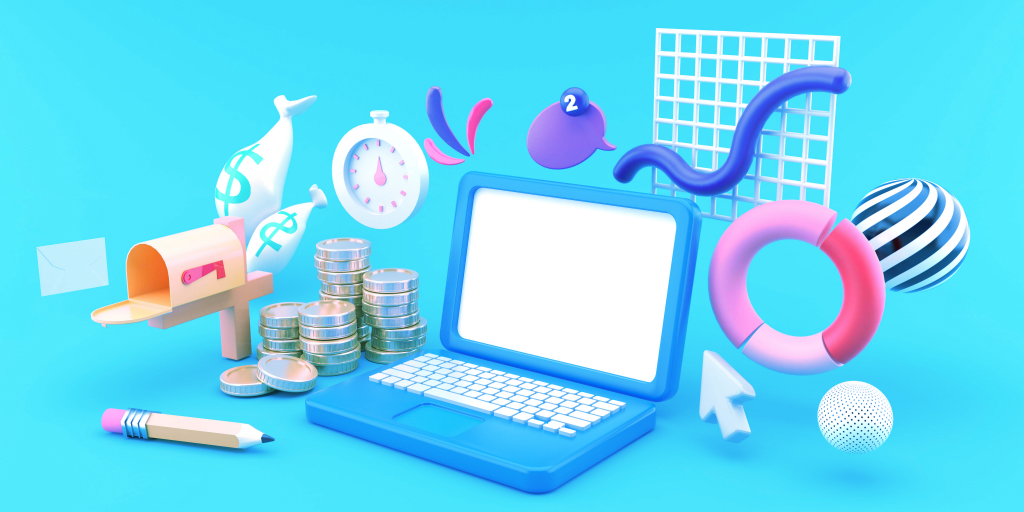 The COVID-19 pandemic has left many wondering what will happen to the job market next and whether we will see some jobs gone completely while others will emerge. The uncertainty of the moment makes almost any prediction pointless. That’s why, rather than speculate about the future, we decided to take a look at the present and see how the global labor market is doing, as of June 2020.

This study contains an analysis of the current situation on the job market and identifies the most noticeable trends confirmed by hard statistical data originating from established sources such as the International Labor Organization (ILO), International Monetary Fund (IMF), McKinsey & Company, and others.

If you are looking to optimize your company’s performance and improve internal communications, create your free Bitrix24 account and start getting results today!


As the COVID-19 pandemic is past its peak and slowly waning in Europe and North America, it’s about time we talked about the aftermath. Whether we will see the second wave or not is still unclear but there’s one thing for sure - the rules of the game have changed in almost every aspect of life, including headhunting and managing human resources.

While the lockdown has not been officially lifted yet in most countries, its effects on the job market over the past few months are already showing. These effects can be arbitrarily split into two groups - “positive” and “negative”. Let’s start with the negative ones since they are obviously more prevalent.


First and foremost, it’s the mass unemployment - people are losing their jobs everywhere in the world. According to a recent report from the International Labor Organization (ILO), “94 percent of the world’s workers are living in countries with some sort of workplace closure measures in place.”


The ILO estimates reveal a 10.7% decline in working hours compared to the Q4 of 2019, which is equivalent to 305 million jobs across the globe. Stats like these are best described by a strictly-scientific term “total disaster” - that’s how bad things are.

Below is a more comprehensive breakdown showing the effects of the COVID-19 pandemic on the global job market by geographical region and type of economy. Turns out Europe and America were hit the hardest. 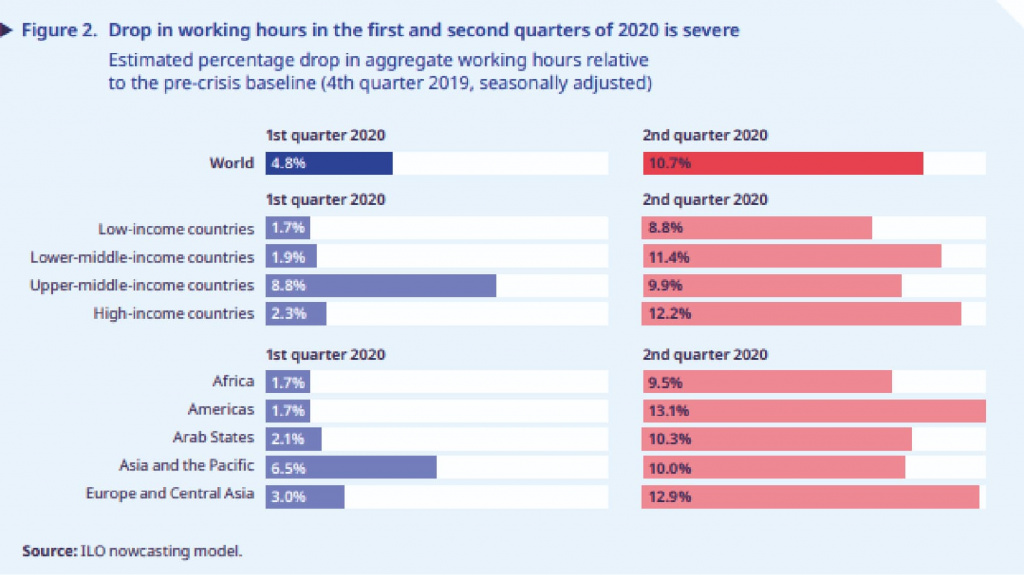 However, determining the exact unemployment rate for a certain country is rather tricky since a significant number of workers around the world have been furloughed and their current status is unclear. That’s why some statistical data may vary greatly depending on the source - we found data from the IMF and Trading Economics to be the most accurate.

According to a regular World Economic Outlook report from the International Monetary Fund, the unemployment rate picture in the world somewhat correlated with what we’ve seen in the ILO data. North and South America, as well as Europe, remain under bigger pressure than the other regions of the world. Although coming in as quite striking now, the data might indicate that these regions will also be among the first ones to bounce back once the pandemic is officially over. 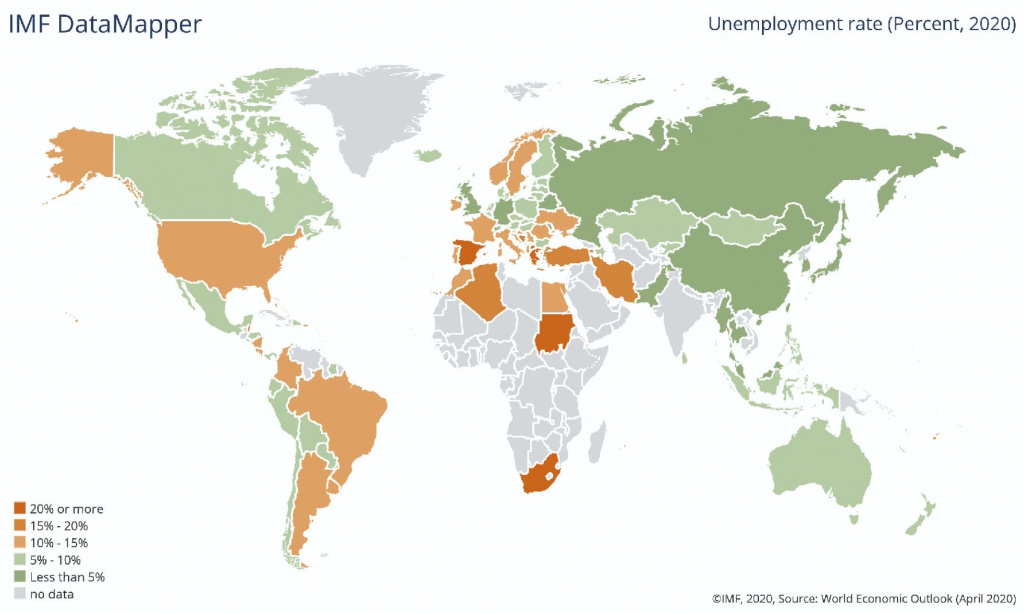 For more specific data on particular countries and a better understanding of the scope of the problem, let’s take a look at these stats courtesy of Trading Economics and compare the current unemployment rate to the late 2019 - early 2020 numbers. 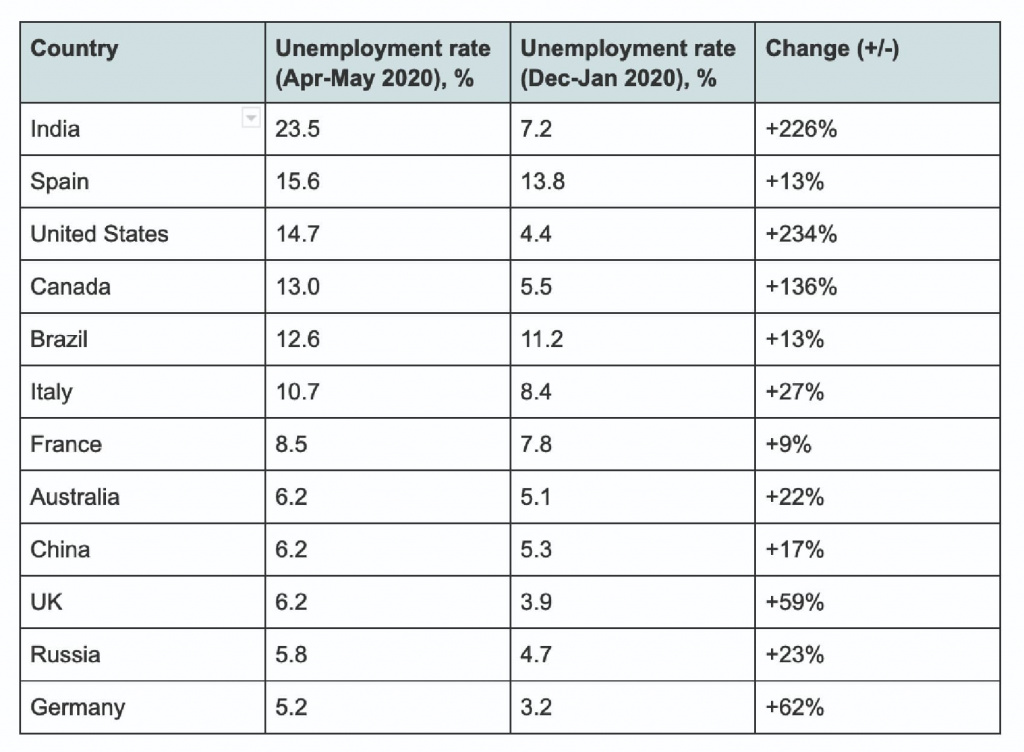 Although the numbers are rather staggering for all countries on the list, the United States and India stand out the most as they have actually broken every historical record possible.

To put these numbers into even greater perspective, here’s an infographic courtesy of Visual Capitalist showing the April spike in initial jobless claims in the US relative to similar spikes during the previous recessions (spoiler - it’s completely off the chart). 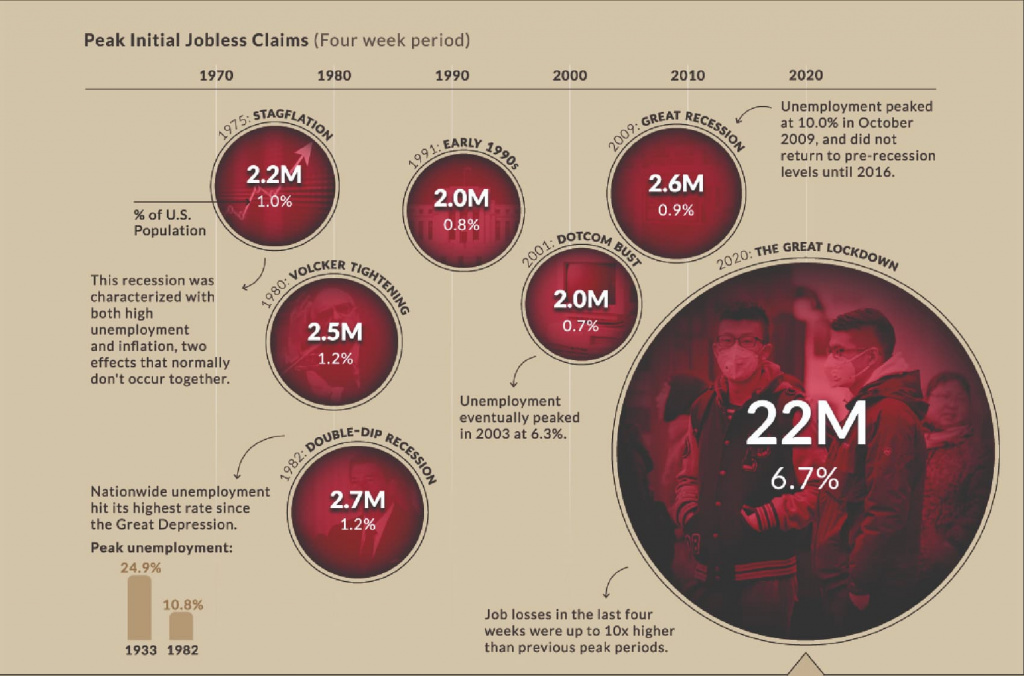 The number of initial jobless claims is often used as an indicator of economic activity and somewhat correlates with the unemployment rate. Despite the stats looking rather unsettling, there is still room for some hope when we do the comparing.

Most of the previous recessions mentioned in the infographic took months or even years to culminate and result in the peak job losses number given here. The current recession is different because it unfolded within mere weeks and was aggravated by the closing of national borders. Therefore, it’s safe to assume that a large part of the businesses that had to close would’ve continued to operate if it hadn’t been for the quarantine (and will hopefully do so once the restrictions are eased).

As for the predictions, it’s all basically guessing at this point. One thing we know for sure is that there will hardly be any recovery until all the restrictions are lifted in major economies. Once they do get lifted, it will be really interesting to see how much of the damage was temporary and how much permanent.


Another important factor of the current situation on the global labor market is the uneven distribution of unemployment. Some economic sectors were hit harder than the others, which led to more people being laid off in such industries as:

People who previously held jobs in these industries will constitute the majority of job seekers on the market in the near future. In addition to those, there are some other occupations, which are considered to be vulnerable (meaning they are subject to furloughs and layoffs during periods of high physical distancing). The chart below courtesy of McKinsey shows vulnerable jobs in the US. 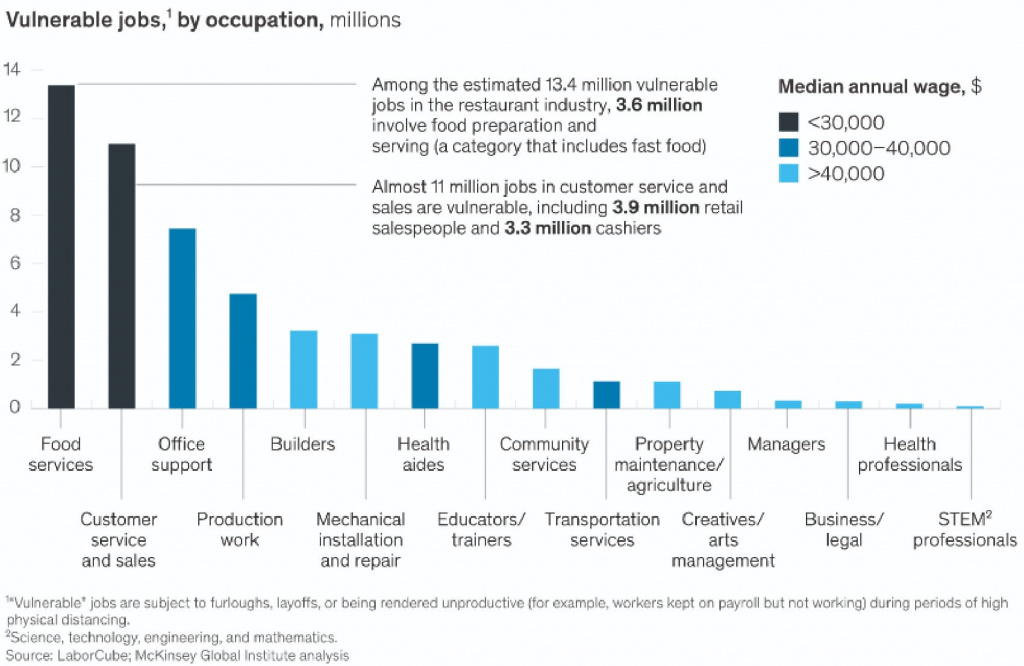 Hardly any surprises here as 46% of most vulnerable jobs are in food service, customer service, and sales. Consumer spending drives the economy and any plunge (especially the one we’ve experienced) has cascading effects. Even though some of these temporarily unemployed persons could find short-term employment as community health workers, warehouse staff, and delivery drivers, this will not solve the problem in general - the crisis hit too fast too hard.


With the IT and Finance sectors, it’s a mixed bag. On the one hand, companies like SalesForce, Morgan Stanley, and Bank of America are holding on and even pledged not to lay off any employees at least through June. On the other hand, many startups are having a hard time these days - over 15,000 people have been laid off by major startups while giants like Airbnb have suspended hiring and frozen their $800 million marketing budget.

Here’s a nice infographic courtesy of Visual Capitalist showing the percentage of employees laid off by major American startups from the onset of the pandemic to late May 2020.


One more negative aspect of this ongoing pandemic is the fact that the unemployment rate is even higher among young people (18 to 25) and pre-retirees (50-65). According to an ILO study, one in six young people surveyed has stopped working since the onset of the COVID-19 crisis. Similarly, around 20% of older workers are expected to lose their jobs due to the pandemic crisis, according to MarketWatch.

All this puts additional pressure on governments that are already trying to rein in unemployment and issue support measures for those who lost their jobs. The stimulus packages and financial aid have been helping to keep the situation under control so far but the real changes will come only after the lockdown is over.

Summing Up the Negative Effects


To sum up the negative effects of the COVID-19 pandemic on the global job market:


Strangely enough, there are a few effects the lockdown has had on the job market that some might actually call “positive.” One of them is the fact that certain companies and industries have been hiring recently despite the recession and overall economic downturn. According to CareerBuilder, these are the industries seeking to grow their workforce in the US:

With the recent spike in online shopping, it’s no wonder companies like Amazon and Home Depot are hiring. In fact, Amazon currently has more than 140,000 job postings, which is quite impressive for our depressing times. The available positions are Warehouse Worker, Stocker, Freight/Receiving, and Area Manager.

For obvious reasons, healthcare workers are in high demand now with the most wanted position being Registered Nurse. See the full breakdown below. 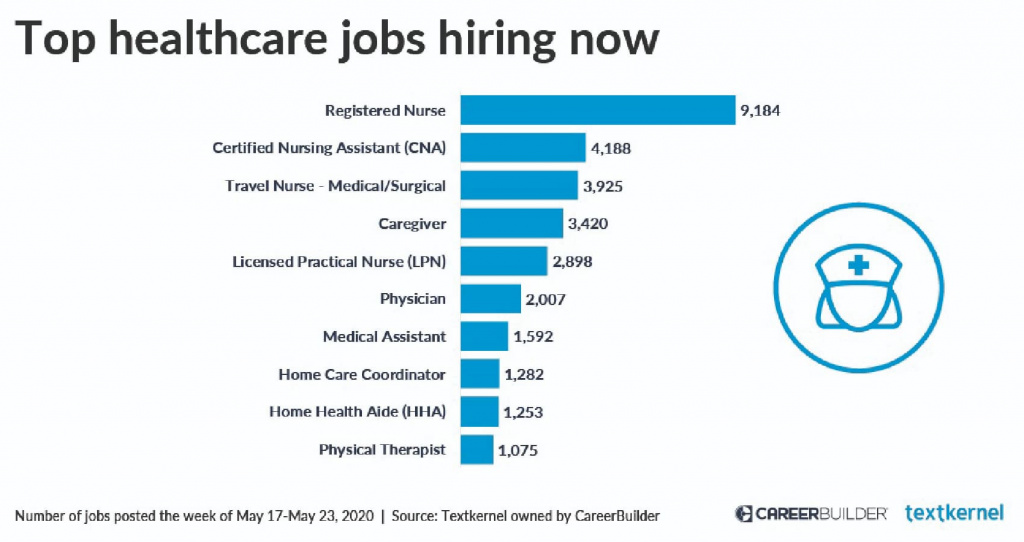 Information technology seems to have gotten off easier than other industries - largely due to the fact that most IT workers and teams are able to do their job remotely. Software engineers and business analysts are the most wanted positions. 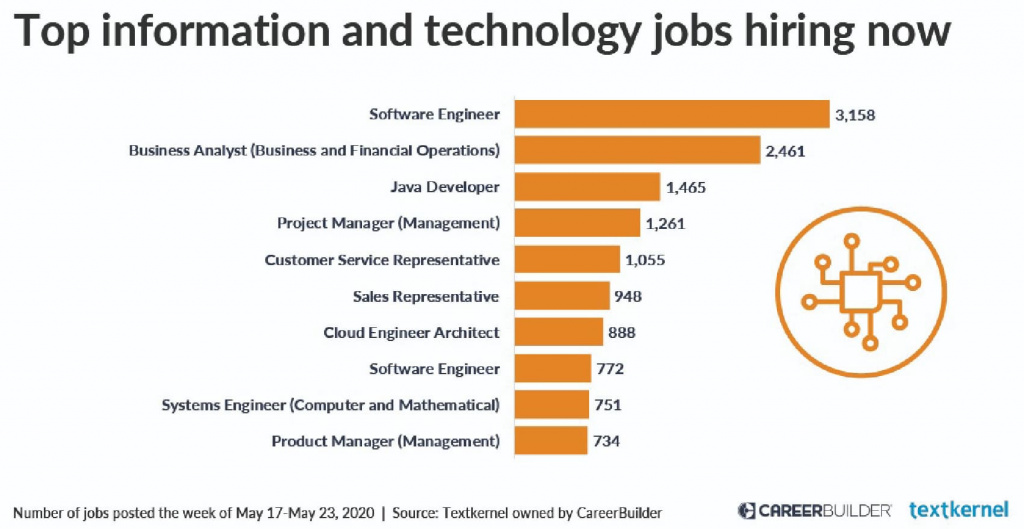 That’s right, banks are somehow hiring these days - despite all the negative market trends and recession. However, the most sought after position is Insurance Sales Agent.

Whether we wanted it or not, the current crisis gave a huge push to many online services that were quite popular already but never expected such an exposure. They include:

Virtual job interviews are becoming a default option for many HR managers, which will hopefully push the developers of these tools to make them even faster and more useful.

Another quirky fact about the second-biggest economy in the world is that the average amount of money earned by US workers per hour surged by 4.7% and is now $30.01. This reflects a greater percentage of jobs lost among lower-wage workers as the lockdown has been more harmful to Americans with mid-to-low income mostly working in service-oriented industries.

Unfortunately, that’s as positive as it gets - to sum it up, we have:


We are witnessing a truly historical moment. The world is changing and so is the job market. Although it’s still too early to say which changes are here to stay and which are temporary due to the lockdown restrictions, we all must brace ourselves for a period of extreme uncertainty. In times like these, the only competitive strategy is maintaining the ultimate flexibility and being able to adapt to any changes that might come.

To assist you in making your company more prepared for the challenges to come, we developed a tool that’s one hundred percent 2020-ready - Bitrix24. It is an online collaboration platform packing a wide arsenal of remote work tools including tasks, project management, chat, videoconferencing, and more.

If you are looking to optimize your company’s performance and improve internal communications, create your free Bitrix24 account today!
Free. Unlimited. Online.
Bitrix24 is a place where everyone can communicate, collaborate on tasks and projects, manage clients and do much more.
Register free
You may also like
12 Great Customer Service Skills your Team Definitely Needs
9 Perfect Ways to Deal with a Client’s Negative Feedback
7 Recruitment Strategies for Small Businesses
Free Inside Sales Management Tools
Bitrix
Support
Resources
On-premise
Compare to
Apps
Partners
Copyright © 2022 Bitrix24